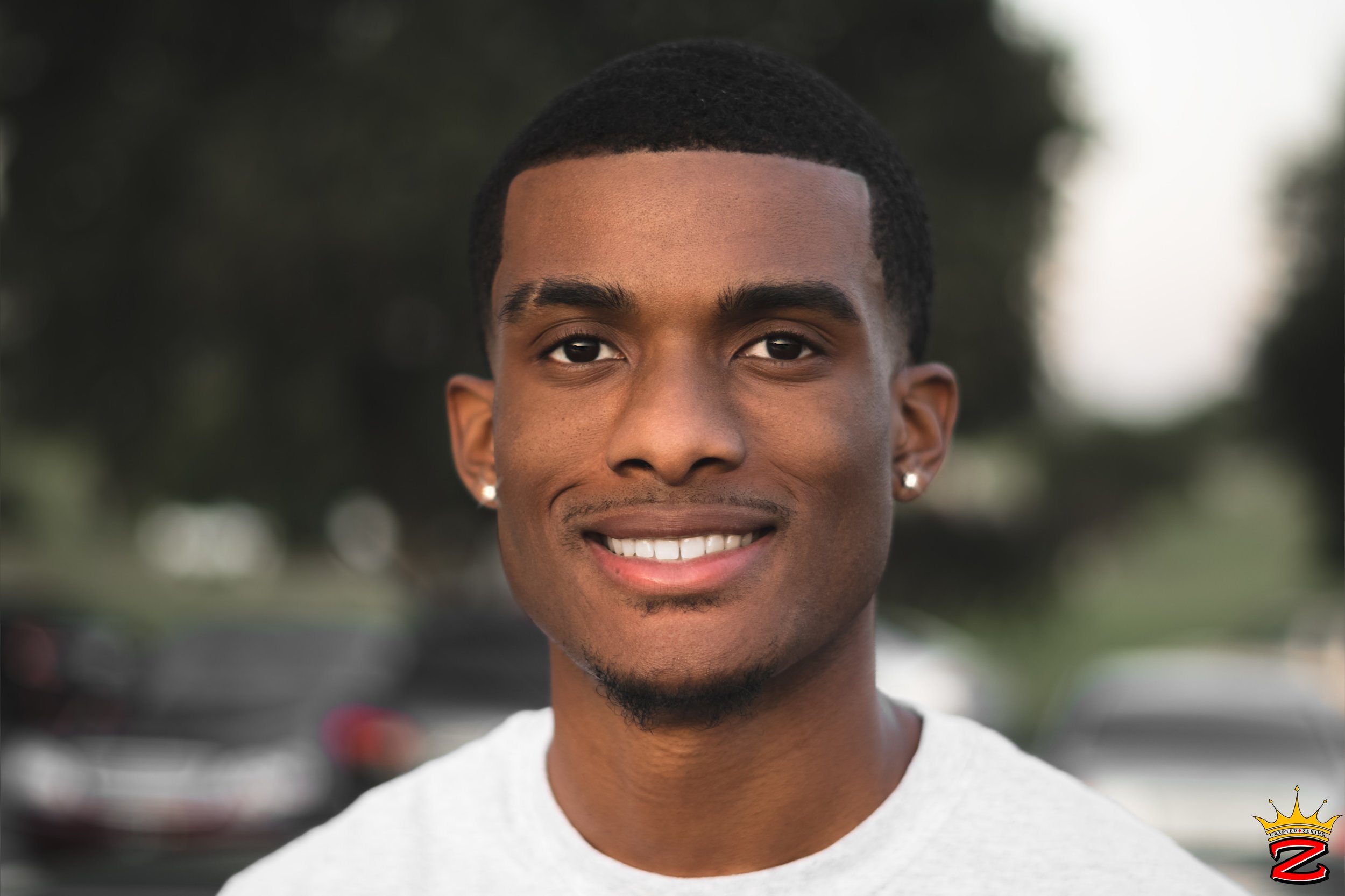 FROM THE FIELD TO THE FRAME

King is a young, black emerging videographer out of the Dallas/Fort Worth area. Present day, King has created a name for himself in the videography/photography field but just a few short years prior his dreams were centered on the field, literally - that’s right, King was a student athlete who viewed football as his way out. I sat down with King to talk more about his transition from the field to the frame and how he plans to stay fresh, relevant and prevalent.

NIKKI: Hey King—that is the name you prefer right?

KING: Hey Nykee, and yes that’s the name I prefer. It’s actually my last name. People started calling me that when I moved to Arlington, Texas. I guess my first name was too much of a mouthful.

KING: It was just me trying to be creative with my name, and since everyone already called me King, I decided to put a spin on it and came up with ZeKing, which is is like an accent-ed version (French) of The King - ZeKing.


NIKKI: Ok, ZeKing (french accent). Well, I’m a football fan, and I know you played football, so I have to ask about the position you played. But, wait, let me guess…defense?

KING: (Laughs) Good accent, and great guess, but I actually played wide receiver in high school. When I first started though I did play defense.


NIKKI: So I was half-way right. I’ll take that. Why did you stop playing football?


NIKKI: That was a great distinction you made, but where did your passion for videography come from? Is there a connection between videography and football for you?

KING: It came from my dad being really into technology. He would always have new little gadgets laying around, and one of the things I gravitated toward was making videos. So as I got older, I started making dance videos…just recording them because I knew how to do it. I started editing them and putting them together because I thought it was cool. Then, in high school I took a photography class because it was a free period (laughs) but honestly, I found the class very enjoyable to go to and my teacher really took a hands on approach to helping us learn and understand the basics. But at the time I was still playing football, so I didn't take it serious. It was those different little experiences, and always coming back to that same feeling of excitement and looking forward to recording something new that brought me to videography. I guess it was always there it just took me a long time to really realize it.

And as far as football being connected to videography, yes, actually it is. The concept of putting in maximum effort, practicing, focus, determination, stuff like that. Also, putting in the work everyday even though tomorrow, next week, next month you may not see the fruits of your labor. It’s a compound effect because when you look up two, three, five years from now you’ll see what all of those little things amounted too. I feel that is the biggest correlation.

NIKKI: That said, how do you feel this sets you apart from other videographers?

KING: Just my understanding of what it takes to develop my craft and take it to another level—my diligence and ability to handle adversity.


NIKKI: Well said. Now, on to some of the not so great aspects of your craft. Do you feel that your background in sports has created any barriers for you in the industry? More specifically, do you feel that your age is somewhat of a barrier for you?

KING: No, because even though I started later, nobody is me and nobody sees the world as I do. I’m not in competition with anyone, I just want to develop my talent and my work to get where I want to get. Like in football, there’s someone better than you, as good as you, worse than you - but at the end of the day, you can only worry about yourself and how you develop. So I don’t see my experience as a barrier because I’m going to still put in the work. In my opinion, the time I spent as an athlete wasn’t wasted because if not for that experience I wouldn’t be where I am now. As far as my age, certain jobs (corporations) look for someone that is older or seems more experienced so I don’t get a lot of those jobs, unfortunately. Sometimes I do get a lucky break, though, and I’m able to show what I’m capable of.


NIKKI: I definitely understand how age can sometimes be a setback. How do you overcome that specific barrier?

KING: I overcome that barrier by always remaining professional, providing a good experience and delivering the best work I possibly can. Hard-work is respected across generational gaps.


NIKKI: So did your age play a factor in you deciding to do freelance work and start your own business?

KING: Yes, it did. I feel like because I’m young I have time. I have a couple of years to try to really build something.


NIKKI: You are definitely starting to build your legacy at the right time. But, tell me a little more about your work. I looked through your Instagram and noticed that you have a great deal of variety with your projects. Do you have a preference of what type of videos you enjoy shooting most?

KING: I like projects that allow creative freedom. For example, there’s some projects where you just show up and do what they say verbatim. I like the projects where I can try stuff out on my own, so like music videos, commercials, fashion, artsy videos. I prefer stuff like that.


NIKKI: I can tell music videos are your strong suit. With shooting for various different upcoming artists roughly within the same area, do you find yourself caught up in any rap beefs or controversies?

KING: The fact of the matter is my job is to create the best visual for the fitted song, so it’s hard for me to be in the rap beef because I don’t have any personal feelings toward anybody, I just do my job. If someone asks me to do a video— I just do the video, period.


NIKKI: That’s a great perspective that you have regarding rap drama. Keep business professional and leave the personal out of it. Have you got to meet or work with anyone interesting in your profession? Any celebrities?

KING: Yes, I would say the most interesting would have to be Megan Thee Stallion, definitely. The reason I say that is because it’s really easy to judge a book by its cover, but when you really get know her and hear what she’s about it’s refreshing. You would think everybody would be like that, but in the rap game meeting a person with substance is really refreshing, it's different. I’ve also worked with Young Dolph, Moneybagg Yo, Money Man, Zaytoven, BlocBoy JB, Kash Doll and Bill Bellamy, to name a few.


NIKKI: That’s amazing! You’ve really been putting in work. With so many different videos in your catalog now, I’m interested to know which one of your works you’re most proud of thus far and why.

KING: Believe it or not, I would have to say the video I did with Shoose McGee called Breathe. It all started from a conversation I had with Shoose. That video also has a lot of very memorable things in it, like the street that my grandma lives on, the long hours of shooting in the rain and mud and how long it took to edit it and get everything to be as great as possible. That video also challenged me creatively.


NIKKI: I saw that video and I have to admit that it’s one of my favorites as well. It’s a given that you’d work with a lot of artists in your area, but how did you start working with people in Kansas City, MO and have you worked with people in other areas as well?

KING: I got connected through an artist that I started working with here in Dallas, Texas, Lil Lyric. He was actually born and raised in Kansas City so he plugged me in with a few local artists. And yes, I’ve worked with artists in Houston, Shreveport and Atlanta.


NIKKI: So you’re already branching out of your area. That’s dope! Tell me about how you find some of the locations for these videos. You have some amazing visuals.

KING: Appreciate it, and honestly just being observant. I also use google maps and take recommendations from the people I work with, especially if I’m in a new city—just network.


NIKKI: Have you ever had to shoot a video in a sketchy area to get the look you were going for?

KING: Yes, definitely (laughs) in the trap, and in an abandoned school. I was in a location one time and someone threatened to stab us if we didn’t leave. I’ve had to trespass before on private property, and you know 12 be everywhere. But it’s worth it because in the end you’ll be glad you did it and if you don’t you’ll ask yourself why you didn’t do it (laughs) so the moral of the story is, sometimes you just gotta say fuck it and get the job done.


NIKKI: Some of your music videos have pretty concrete storylines. Do you also double as a director for your videos?

KING: Yes, I do. I often sit down with the artist and just pick their brains about the vibe and feelings they’re trying to evoke from the song and try to come up with something that paints the picture we envision.


NIKKI: That’s smart, you as the director and the artist should always be aligned. Well, King, what can we expect from you in the next few years? Do you see directing, on a larger scale, in your future?

KING: Definitely, I definitely see directing as something I’ll do in the future. In the next few years though, I plan to build my company to where I have employees and be half-way into revolutionizing the game (laughs) don’t put that. Nah but honestly, I want to do short films, more commercials with top brands…..a lot of partnerships.

KING: Do like the greats do. Stay up to date with what’s cutting edge and never be afraid to try new things and switch it up. Oh, and also stay objective and have an objective outlook on the work I put out. Like, if my work sucks, I need to be able to say this shit is ass — I never want to get comfortable or be satisfied with where I am.


NIKKI: As we come to a close, do you have advice for anyone wanting to do what you do?

KING: Stop caring about what people think or say, just do it. If I can do it,  you can do it too.

ZeKing can be contacted via the following social media platforms: