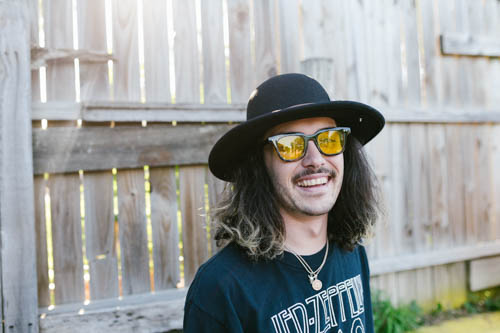 Even when twins are born, there aren't any duplicates made. Style, ideas, and mannerism can be stolen, but your mind is one of one. Your personality and perspective cannot be recreated. Your experiences are the key to your individuality. What makes you special will allow you to change your surroundings. Being yourself and finding yourself will open doors. As I sat with Jericho, his words were running through my mind like a motion picture. The story of Jericho is colorful, animated, and filled with twists and anticipation. The highs and the lows are what make a good story. He has been able to continue to push his own personal limits and put his own stamp on a growing industry in America.

“I always felt like I belonged in a different space.”

It didn’t take Jericho long to find out who he was. Around third and fourth grade he can remember vividly being drawn to expressing himself stylistically in ways that were way far-earth from the norm. Little did he know, that early-felt inspiration would guide him through a life journey.

“I knew I could create, I knew I could bring people together. I knew I had a quality of unity, so me and my best friend Burl started bringing like-minded entrepreneurs from different schools together and started FK,” Jericho said.

FK is the brand that begin at all for Jericho. This was his introduction into self. When his right-hand man Burral left FK to chase his dreams, Jericho knew it was time to branch on his own.

“This is where I truly think my life started,”he said.

Jesse Jackson, part owner of Mammoth Productions is Jericho’s first mentor. Jackson was tuned into Jericho’s  Instagram, where he was one of the first forward-thinking cannabis supporters. From there, things took off for Jericho; he was working major events, meeting new artists, and really feeling like he had found a lane that let him explore his creativity. He found that being himself was his best tool to continue to grow and move forward. His focus on building genuine relationships opened the doors to more opportunities.

“I started getting questions like, ‘hey man have you ever been on tour? Would you like to join us?’ Machine Gun Kelly called me and asked me to go on tour. I took my first opportunity and went on tour with Jarren Benton. He asked me if I could do his merch. I thought man, that seems like the low end of the totem pole...next he asked if I could be his tour manager,” Jericho recalled.

One opportunity led to another. He moved out to LA to work with a cannabis startup blog; Highpowered.com. LA was a game changer, Jericho got deeper into events and cannabis and began to build his personal brand.

Jericho realized that being himself was what continued to open doors. Imagine waking up in the morning, going downstairs, and seeing some of the music industry’s biggest acts in your kitchen. That is the life Jericho had worked himself into. As good as things were going, he could sense a slow down in his role in his cannabis blog. Change was in the air.

“I got a call from Jerran. He really needed me to go out on another tour. While on tour I started having really bad stomach pains, throwing up blood, having really bad rear end problems. I was in such bad pain, I had to fly back to Kansas City. I come back to KC for a week. I went to four or five doctor appointments and everything was coming back negative. I kept telling my mom something was wrong. I went to one more doctor in LA, and BOOM! Blessed with Crohn's disease. The doctor said, ‘hey man, you have to quit tour.’ I couldn’t do that. Its all I had at this time. I lost all my confidence. I came back to KC and cried. I thought my life was over.”

Jericho got a call from the doctor telling him he had to leave Kansas City for a city that could support his medical needs. The new plan was to move to Denver, Colorado.

“I felt like it was over. I was only able to work 99 days that year. I was the most unhealthy I had ever been. I hated myself. I kept all of my mentor connections and would talk to them periodically, but I remember the day I started feeling better. Jesse hit me up with the idea of a hip hop festival in the city.”

He was back, making connections and having conversations to grow the festival. He started feeling like he was reclaiming his sense of self, until he went to pick up his check. The amount of money he made from what he saw as a second chance was a third of what he expected. Jericho was crushed. His mother wasn’t having it: she told him it was time to fully ask for money and build a game plan for how he was going to help. Jericho called Lance Perryman, founder of SmashBurger, and owner of a cannabis brand “The Dab” in Denver. He pitched a role to Lance to create a podcast that brought together hip hop artists and a budtender. Perryman asked,  “Can you start Monday?”

Shocked, but excited was the feeling that ran through his spirit. He felt like he was back in his zone working in cannabis and making a salary. It didn’t take long before Lance noticed Jericho’s talents. Moving up and earning bonuses took no time at all. Jericho dove deeper into changing The Dabs processes and language. Business was going great.

“Next thing you know, I take over marketing, then I take over PR, I took over vendor relations. Now I look up and I’m helping HR hire people. I’m heading sales. Lance really let me handle everything. I was able to get an assistant. I was running my own marketing meetings.‍”

Jericho has disrupted the cannabis industry by being organic and combining cultures. Take two big brands, be the middle-man, and create. This has been his focus.

“I was eating it all up. I was working 80 hours a week happily. I kept going and going. I was in the 1% of salaries under 30 in the cannabis industry. After being at The Dab for a year and half, Jericho started to want more. He started to understand that his time was more valuable than a dollar. He started asking himself, “Where do I go from here?” After redoing his resume, Jericho realized he felt stagnant. He planned to meet Lance for lunch and believed he was going to tell Lance how he was feeling. He loved The Dab and was going into this meeting really emotional.

“I was being real with Lance, ‘Hey man I think I need to move on, you guys have a good team.’ Then I started back pedaling. I told him, ‘Hey man I think I’m just making a bad decision.’ Lance told me he thinks the company is feeling the same way. Offered me a severance package, kept my phone on another couple months to give me sometime to figure it out. I was down. I couldn’t believe he let me go. Within the first 30 days, my life was what I envisioned. My goal was to use my resources to grab equity stakes on a little bigger of a scale. I started curating cannabis companies and projects. Today I own licenses in Colorado. I’m about to own licenses in Kansas City. My salary here is insane. I was shocked because I didn’t expect it to work. 30 to 40 days after I left, me and Lance went out to dinner together. I looked at Lance and said, ‘you didn’t want to fire me that day did you?’”