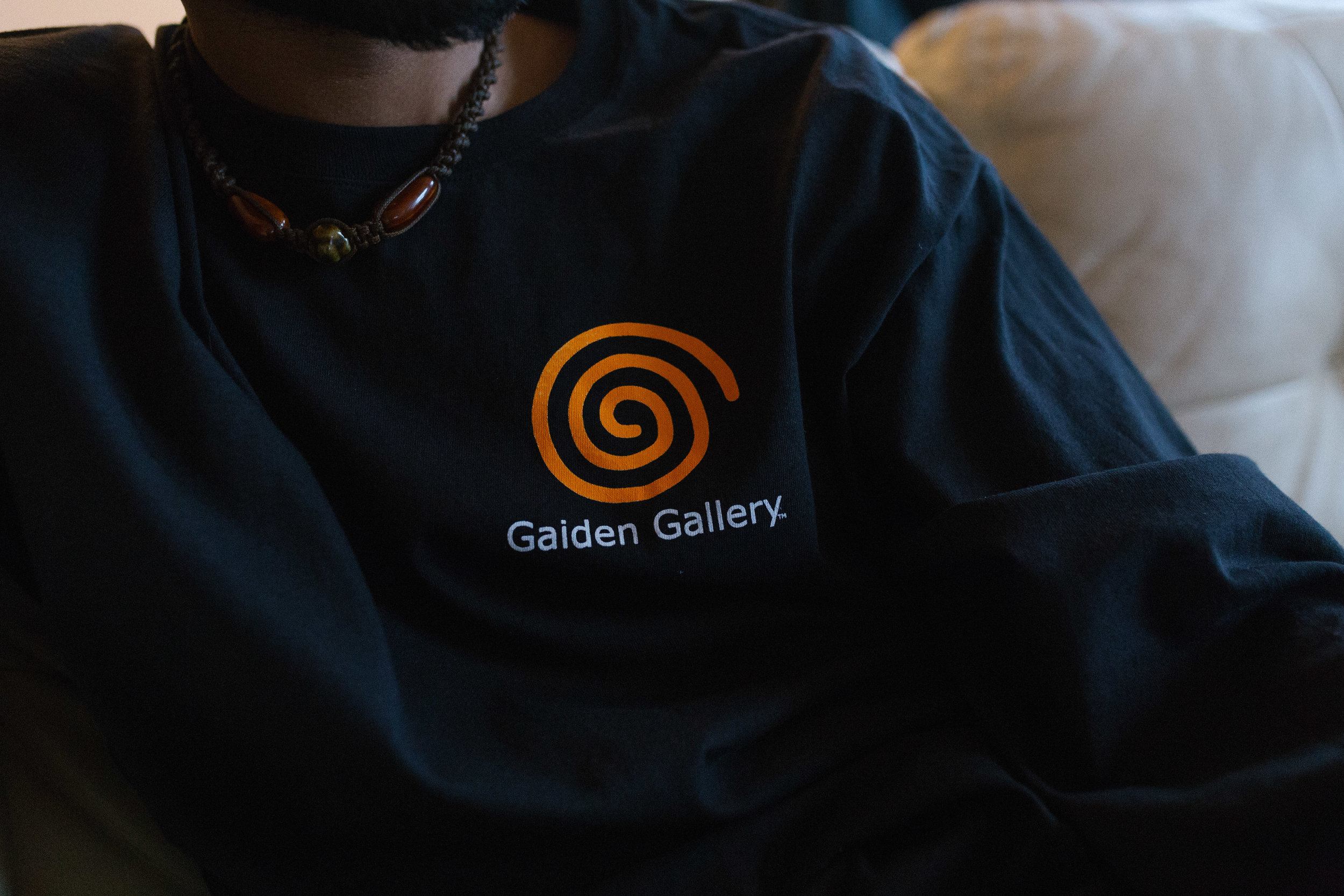 Cold Kansas City winter evenings can cause the most motivated of creatives to venture into anything that requires as little work as possible. You know, kick your feet up? However, in a slowly quieting downtown, a group of artists meet together in their downtown loft to create music in their warm setting. The grind never stops. After making my way out of the brutal cold of outside, I found myself in the downtown loft of rapper, disk jockey, producer, and designer Dom Chronicles to chop it up for a little bit.

Dom is a jack of all trades, you can tell by just looking at all of the descriptions I used to describe him, but despite all those descriptors, Dom is one of a kind.

Dom seems like he can do it all. Nowadays, Dom has put a major focus on his newest venture, Gaiden Gallery a dope brand influenced by the video games and japanese anime culture that we millennials grew up on. With aesthetics from Street Fighter, Pokemon, Digemon, and anything else you could’ve played on the Sega Dreamcast or Nintendo.

[Gaiden Gallery] is brand or an educational platform. For me it's like I want people to know where all the stuff they got, what they doing now, where that all came from. Regardless of what animes they’re watching now. I want to highlight, the old sh**. When you put a PlayStation 1 in front of a kid that's like 16 or 17, never experienced a Playstation 1. The first thing they’re going to do is get bored because its not as crisp, the graphics aren’t as crisp. Its not what they’re used to you know? I want to show the foundation of things now. I can only represent what I know.

‍With Gaiden Gallery, Dom sets free the nerds and geeks of our childhood through clothing and events. Dom is truly himself and in his element. Inspired to create clothing that he wants to wear, with a streetwear twist. No corny stuff though. Throwing in elements such as the dreamcast symbol, flipping it on T-Shirt to represent a gaming system he loved growing up.

The time is now for people to express themselves. I feel like people aren’t so heavily branded and stuff anymore. People just like to wear what they like. I’m just trying to make something I like, something  some of the homies will like, and we go from there.

Self expression is key, and Dom has been expressing his authentic self for years now in his music. With his new album, “Let’s Go Outside” on the way this summer, he’s never felt more in his element.  Overtime, Dom had to become more comfortable with the most important fan of his music, himself. Losing family, close friends gave him the ultimate realization that life is short. With that, there’s only so much time in the world to learn valuable lessons.

Time is like one of the most important things [to me] and making good use of your time is important.  My mom always told me to make good use of your time whether it be used bettering yourself. Balancing how you spend your time and weigh it against what you really want to do and how much time you need. That’s what I would do when I needed reality checks. In my early twenties, I was out here rapping and sh** and I was like doing my thing, but the scene hadn't really developed yet [in Kansas City] or like you know there was just a lot of things we didn't know! I should pull up the LA, I need to have my dope album covers rollouts , etc.

I realized how much time I spent, not doing everything I love to do, putting too much time to things  I thought weren’t important, but it all happened in order for me to learn

Through constant realizations, a few stumbles, Dom Chronicles found the people, the homies that have supported him thus far and has continued to work through them. Dom came to the realization of focusing on the people who support him, rather than the people who weren’t. A contrast to earlier in his journey when he found himself performing for people and in places that didn’t make sense for him. Time is of the essence once again. At the end of the day, Dom wants to be happy and make the good people around him happy as well.

What does the future hold for this constantly working, “4TheHomies” rapper?

I want to do like pop ups and stuff like that. I just need more stuff you know? We just working on that. I want to interview people for Gaiden Gallery, just based off me liking what they do. The gallery is not only just a brand, its for people too. I want to collab with more people, especially around the city. Especially with the clothes, Palisade and a couple other brands out here. Its all definitely going to mesh with my music. I want this all to be a staple, not just in Kansas City, but a staple of this nation.

Check out Dom’s Music Here and Follow Him on his social media pages below. Got content ideas or want a feature? Email hello@bydesignmag.com.