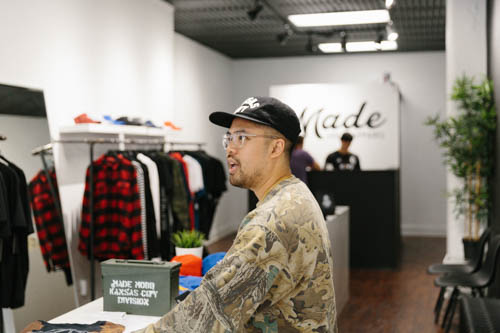 “This Ain’t Luck” reads boldly from every MADE MOBB price tag. A motto that a resilient team of dreamers has made known in their short existence of being a Streetwear Brand. This midwest collective of brothers ranging from different backgrounds have significantly contributed to a growing fashion scene here in Kansas City, and in the Midwest overall. These rebellious brothers, let it be known that with their growing success, haven’t made it to this point by just sheer luck, they have made it this far by tenacity, hustle, creativity, and overall unity. Inspired by their strong influence here in Kansas City and their storytelling capsules, the By Design Team reached out to the MADE MOBB team to talk about the hard work of entrepreneurship, the Midwest’s emerging creative culture, and our common love of Streetwear. We clocked in two hours of meaningful and real conversation with Vu Radley, Co-Owner and Creative Director of MADE Mobb and Mark Launiu, Co-Owner and President of MADE Mobb and had to condense down such an impactful talk. Regardless, as a creative, know that these guys are paying their dues while engineering culture.

In the beginning, Co-Owners, Mark, Vu, and JP found themselves working together in a local Sprint store. After witnessing a not so flattering t-shirt design on a customer while closing, they began to jokingly laugh at the t-shirt they all witnessed.

The shirt was ugly. People were really spending money on this, you know what I mean? Crazy. We were getting ready to close that night. JP is counting money, sitting on the couch. I said, “Ya’ll we should start a clothing line, we could do so much better”. JP thought I was crazy. JP was selling shirts back in high school and it just didn’t work out. People just weren’t buying t-shirts, you know what I mean? Vu comes out of the bathroom from hearing us talking and he’s laughing. He said, “Hold up, yall talking about starting up a clothing line? Man bro I tried that before.”

JP and Vu had both experimented with designing and selling t-shirts with no luck in Kansas City. Back then they were skeptical of a market here in Kansas City that supports t-shirts, an important element of Streetwear. However, Mark was persuasive enough to convince the two rightfully skeptical co-founders to create would end up being arguably Kansas City’s biggest Streetwear brand right now.

I would say, “Remember when we had his great idea and would have made millions of dollars of it? Imagine what we could do with this clothing line?” Vu already graduated with a program for graphic design, JP was our manager so he already had that business background and me? I was a club-rat. I knew a lot of people, I knew a lot of promoters.

It’s crazy how a team can come together. Like any creative or entrepreneur, they really didn’t know where to start.

That’s how it all started. It started meeting every week with a posted note. We’re like how the f*** do you start a business?! We didn’t know anything, but everyday it grew. We told ourselves that this is a crazy market, you know? We love doing it, so back then we said this is our hobby, our side gig. In 10 years we’ll see where it goes. We know we won’t make many within those 10 years, but 10 years is the goal. This was never about the money, this was never about the clout, it was just to say, hey we built something big. That’s what pushed us in the beginning.

Literally it was about making enough to just do the next f***ing collection. It started it off with a box of like fifty t-shirts.

Fifty T-shirts turned into thousands of t-shirts. Humble beginnings allowed these men to chase a dream of creating a brand that so many can identify with. They made a commitment to remain themselves throughout the process. They worked closely as a trio, selling t-shirts wherever they could, hitting the road together, throwing parties to attract potential new customers, and going to streetcon sneaker festivals to network. Back in the early 2010’s, a Streetwear scene was non-existent in the Kansas City metro. Little did they know, their meetings at Buffalo Wild Wings every Tuesday and adding more brothers to their fold, that they would be pioneering a scene here in Kansas City. Don’t be fooled by their recent success, these men are still in the trenches of entrepreneurism. Fighting daily battles to not only make a living for themselves, but their families at home too.

If we don’t hit our goals, we don’t eat

Some of us have kids. So for you to put all your eggs is one basket is one huge risk, imagine having to go home and tell your lady less money is coming in, but what you’re doing..you believe in it. Its your baby.

Vu: Shoutout to our support system! They helped put our dreams into fruition.

With that sort of drive, that relentless motivation, and the support of your foundation, you can’t afford to be complacent. MADE Mobb are students of their craft. Every dynamic t-shirt, every sleek jacket, every hoodie tells a separate story. A story that is authentic and true to the fellas of Made Mobb Team.A story that is a reminder of a tough lesson learned or just how far they have come in Streetwear.

We tell stories through our clothes. People wouldn’t know, but if you knew us, you’d be like “oh sh*t that’s crazy! We was hiding stories between in our clothes.

In the midst of their own grind, they have never forgotten to be students if with recent success. Like every creative, whether you paint, capture photos, write, or sing.. Becoming a master of your craft should always a goal. No excuses. Even in a Kansas City that isn’t well known for its Streetwear scene, they continue to embrace their community and learn from their inspirations.

People overlook the Midwest and what we do in style. They always look at the East Coast and West Coast. We feel like we have a particular style here. It may be more relaxed and simplistic, but its something. We’re taking those utilitarian aspects of workwear, athletics then taking and tailoring it to little details or little pops of color or combining different basic pieces with each other in a mash-up to create a new piece. So you'll see that lot in our spring pieces. We’re trying to pioneer a midwest streetwear. We’re taking our influences from all the people and brands we love, as well as roots from Kansas City.

The Midwest is always overlooked. Trends seem to come late here, but I think that's one of the cool things about where we’re at. We have room to be able to create a lane for the Midwest or Kansas City in general. Shoutout to the people who are helping to push streetwear throughout Kansas City. Volume 1ne was one of the first stores to pop up and bring streetwear here. East and West Coast streetwear. Shoutout to Stranglehold. People ask why would you want more competition? That’s not the point. Let’s grow together. We want more people on our block.

Building Infrastructure.The fellas of MADE Mobb not only understand the importance of creating an ever-growing and ever-evolving brand, they also took it upon themselves to build a community based upon the principles of inclusion creativity, hard work, and street culture. Their efforts haven’t been unnoticed, with their summer block parties that attract hundreds of Kansas Citians who identify in some capacity with what MADE Represents.

It's one thing to revel in your own success and focus on your next moves as a brand, it's another thing to be engineers of culture. They support many other young and upcoming entrepreneurs looking to reach the success they have had thus far. MADE isn’t afraid of competition, as a matter of fact, they desire other streetwear brands to develop locally. To them, community matters more than being the “best”.

This philosophy of culture engineering led MADE co-founder, Mark, to create The Kritiq Fashion Show, a fashion show that highlights creative designers within the Kansas City. Breaking through barriers set by a developing fashion community, in Kansas City, the Kritiq breathes life and exudes youth in an always changing fashion scene.

This show is not nearly traditional. We broke all of the rules....The Kritiq is so high energy. Other fashion shows are too serious...Culture. We mix in traditional things catering to multiple crowds. We cater to everybody....The Show really helps designers get to a new crowd. We always like running around with new faces too..

With a platform like the Kritiq, the MADE Mobb team are pioneering a culture within Kansas City that is honest and true to the midwest. These guys have made mistakes, they have stumbled so many times.

We’re very open about our mistakes.We’ve had mistakes that have happened yesterday. Its not all glitter and gold. There’s a lot of bullsh*t in the mix. We just gotta roll through them and let them slide off. You know? Learn from our mistakes.

While they continue learning and remaining in the trenches, they’re learning to smell the roses and live in the moment too. MADE Mobb is a living testament of grinding to success. There story resonates with so many people. They’ve had to preserve constantly, learning how to run a business and learn how to create dynamic apparel. The sky's the limit and they have most certainly had their wins. They have a flagship store with another store opened up this year in a second location here in Kansas City. They are carried in multiple stores across the country. Just recently, the entire MADE Mobb team was able to leave their other jobs and work full time for the streetwear brand. They’re now diving deeper into fashion with the potential for cut and sew products. MADE’s recent success could be called a lot of different things: Dope, Unprecedented, Inspiring. One thing you can’t call it...is luck .