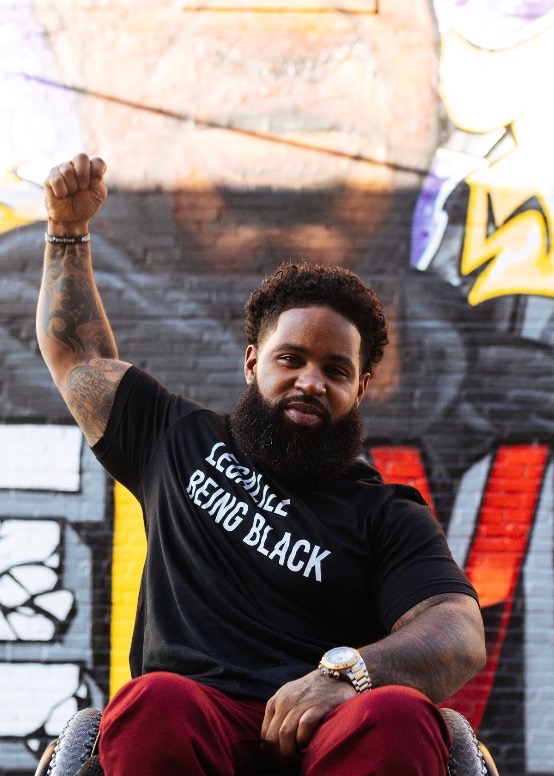 Hear Us, See Us: Wesley Hamilton

The murders of Breonna Taylor, Ahmaud Arbery, and George Floyd have thrust police brutality, and the propensity white people have to deputize themselves against Black people into national and global talking points. The same was said following Trayvon Martin and the Ferguson Uprising (sparked by the murder of Michael Brown), but this does feel different. Never have we seen so many companies feel obligated to comment on this kind of social injustice and make their stance regarding the matter publicly known.

Our email accounts have been accosted by "personal" messages from CEOs heading some of the nation's largest companies informing Black Americans that they "see" us, "hear" us and that Black Lives do Matter. But it's never been a secret that large companies see and hear us. It's evident in the way that (mostly white-owned) companies have profited from Black art, fashion, culture, intellect, and labor for centuries. With the Black Lives Matter movement going global, what does it mean to see and hear the Black community truly, and what does organizational support look like? We turned to a pillar of the Kansas City community, Wesley Hamilton, to gain a better sense.

Wesley Hamilton, community activist and founder of Disabled But Not Really, a philanthropic non-profit seeking to empower those living with disabilities, released a statement regarding his intent to cut ties with organizations who have not made it clear that they are in support of the Black community. The statement reads:

‍"To create and celebrate an inclusive and diverse community filled with individuals who are inspired to live their best lives, DBNR will only align with partners that share the same values and goals. DBNR is taking action to disassociate with current partners who have not supported our mission and vision."

Decisions like this are vital for the realization of racial equality and precisely why Disabled But Not Really has already disbanded from a Kansas City gym. While coming to this decision may have been difficult for others, there was no hesitation for Wesley. Wesley saw it as his responsibility to take a stance, underscoring the importance for his community to have a voice. Understanding the magnitude of his platform, Wesley states that he would not have felt "real or true" to his people had he remained silent. Wesley, paralyzed from the waist down after a shooting, is known for his triumph over adversity and activism within the disabled community. However, his personal experiences force him to recognize that racism often trumps ableism.

‍"Discrimination for Black people is so deep that it doesn't matter if you have a physical limitation," he begins. Giving further insight on his intersecting identities, he states, "I'm a disabled Black entrepreneur… as a disabled man, I already face many barriers to find accessible places to network and do business. Still, I also find myself always being challenged with my intellect because I'm a Black man."

When people see Wesley, one identity is noticed before the other and carries a more significant burden. Because of this, fear of backlash for opting to no longer work with organizations who do not actively advocate for social justice was of no concern. Despite the fantastic work he does for multiple communities, society does not allow him to forget his Blackness. As such, he centers his identity as a Black man first and needs associates to accept and support that.

With expectations for DBNR partners made clear, Wesley lists key actions organizations, and allies can do to hear, see, and support the Black community. He stresses the value of connecting with local community activists, those who have and will continue to do the work even #BLM is no longer trending.

The voices that should be authority are those who are from marginalized communities. Not only should these voices be amplified, but they should also be supported financially. Acknowledging that donations most often go to large, national organizations, Wesley states, "there's a lot of money going around, but it's not going to the right place."

This trend is problematic because it's challenging to track if the communities most in need receive funds. However, Wesley feels donating directly to those communities is the easiest way to solve that issue. He also places a great emphasis on representation in organizational spaces. He advises businesses to "make sure there are Black faces on that [executive] board, on your leadership team, and in management making decisions." Wesley sees the need to have Black team members on Diversity and Inclusion boards and understands that should not be the only executive positions we hold. He believes the key to social and racial equality within organizations is to diversify leadership and redistribute organizational control. Simply put, "nothing is going to change until more Black faces are in positions of power."